For many of the prisoners who were returning home after their liberation in May 1945 and who tried to recover slowly physically, a regular return to this place of infinite suffering was completely unthinkable. The concentration camp imprisonment, which often lasted for years, had traumatized these people too deeply, and it seemed too important for almost all of them to leave this time behind and go towards a free but uncertain future.

On 16 May 1945, the Soviet citizens - one of the largest groups of prisoners in terms of numbers - left the roll call area [Appellplatz] in orderly formation in the direction of their homes and the Mauthausen Oath was proclaimed in 16 languages at very moment. This text is a commitment, derived from the experiences of the concentration camp internment, to stand in solidarity and united for a better world.

Very soon, however, many of the liberated concentration camp survivors realised that the regular return to Mauthausen as free people and their participation in a liberation ceremony was becoming of paramount importance for themselves. In the first years or decades, when thousands of concentration camp survivors still met in Mauthausen every year in May, the liberation celebration also fulfilled the function of a catharsis. Knowing and reassuring oneself that one had survived, exchanging experiences with fellow-sufferers and then going home again helped many people to cope with the massive traumatisation.

The second, socio-political function of the clarification about what had happened, the mottos of We must never forget and Never again! and of addressing the youth became self-evident for most of the concentration camp survivors.

The first official liberation celebration in Mauthausen took place as early as 1946 and included a rally at the foot of the "Todesstiege" in the quarry with more than 10,000 people and an exchange of information in Linz. The participants have certainly been aware of the importance of this meeting and of this first liberation celebration. Indeed, an official final document was drawn up, bearing the signatures of the national delegates and confirming that this liberation celebration would be held annually in the future. 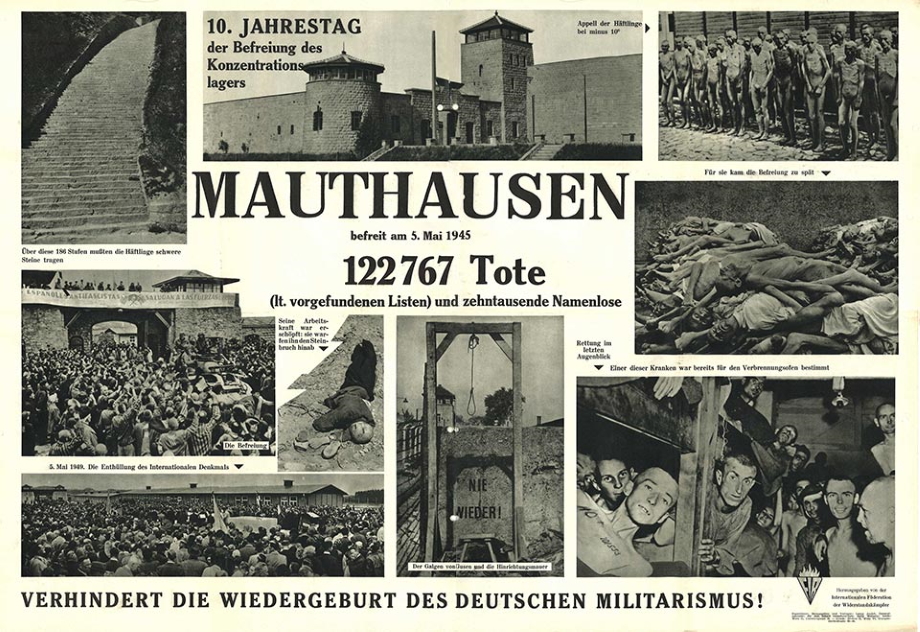 The liberation celebration in Mauthausen (traditionally usually in mid-May), however, remained for decades a matter for the survivors, always international, but without much resonance in Austrian society. For decades now, the Liberation Ceremony has been organized by the Mauthausen Komitee Österreich in close cooperation with the Comité International de Mauthausen and the Österreichische Lagergemeinschaft, with financial support by the public sector and even more by private donations.

The first survivors who returned to Mauthausen in larger groups were French ex-prisoners. In addition to the French, groups from many other nations regularly came to Mauthausen for their national commemoration, as far as the current political situation in their home countries allowed. For example, the freedom of travel for former prisoners from the so-called Eastern Bloc was always significantly more restricted than for survivors from other countries.

During the first 40 years after the end of the war, there were almost no commemoration and liberation ceremonies in the former subcamps, where often not even scanty remnants of the camps were left. If memorials or memorial stones were erected on the sites of former subcamps during these years, this was almost without exception due to international efforts. The groups responsible for the erection of these subcamps' memorials usually kept to themselves for the commemoration ceremonies at these sites. The rescue of the former crematory furnace in Gusen and the erection of the memorial can be traced back to an initiative of the Comité International de Mauthausen who also remained almost alone with their commemoration until the 1990s.

For the liberation celebration in Mauthausen, public attention in Austria began to grow a little with the opening of the museum by Federal Chancellor Kreisky in 1970, and from this time on there was also regularly greater Austrian participation in the celebration and speeches by high-ranking Austrian politicians.

Compared to the first liberation celebrations in Mauthausen and the activities of the following decades, the celebrations have changed fundamentally.

What is particularly important to us as organizers is the strong involvement of young people from Austria and abroad. Today there are only a few concentration camp survivors, and even fewer are able to travel to Mauthausen every year. However, we have taken on the task of celebrating the liberation celebrations every year and have assigned a central role to the youth. The youth rally in the first quarry and later at the "Youth Monument" are an integral part of the liberation celebration in Mauthausen.

Also for this reason - and thus we close the arch to the beginning with the Mauthausen Oath - it is a matter of the heart for us that this year the Mauthausen Oath will be recited by 20 young people from all over the world in their mother tongues. Between 1938 and the liberation in May 1945, German was the only permitted language in Mauthausen. The more languages we hear today from the countless countries that had victims in Mauthausen, the better we fulfill the legacy of the survivors and the Mauthausen Oath.